Introducing Blinking Owl's Old Tom Gin - a limited release straight from our Napa wine country estate. Blinking owl gets some of the best semillon wine barrels each year, and use them to create this unique gin that's rich, sweet, and perfectly suited for those lazy summer days. Soak up the sun with a glass of Old Tom Gin in hand - it's the perfect way to unwind and relax. Cheers!

OWL STORY
The Blinking Owl is the very first craft distillery in Orange County. We also are one of the first distilleries in the state of California to hold the Type 74 Craft Distillers License allowing us to operate our tasting room and sell a few bottles. We make Vodka, Gin, several types of Whiskey, and the Scandinavian spirit, Aquavit.
SPIRIT behind the Owl…
We are locovores, grain nerds, and control freaks so we decided to actually make our booze the long way: from grain rather than pre-made spirit. We mill it, mash it, ferment it, distill it, and, in
the case of whiskey, barrel age it. We also use locally grown Valencia oranges for our orange vodka, and feature hibiscus, the flower of our city of Santa Ana, in our aquavit and gin.

Founding GREAT Grandfather:
The Founder, Brian Christenson, had a bootlegging great-grandfather, Fred P. Armbrust. Fred had a still on his dairy farm hidden in the basement behind secret passageways. He would covertly provide his local farmers with his “good spirits”. Brian’s dream is to carry on Fred’s passion by providing “good spirits” to our very own neighborhood, legally, of course!

The BLINKING OWL REBIRTH
Brian and Robin Christenson, longtime Santa Ana residents, had heard stories of the
midcentury “Blinking Owl Bar” on the corner of Birch and Third Streets, known for an iconic owl sign that would “blink”. Inspired by the craft cocktail movement, the farm-to-table food movement, and current thriving craft distilleries, the husband and wife team saw an opportunity
to bring a local distillery to the neighborhood, paying homage to the history of Santa Ana.

Brian Christenson, Founder,
Chief Executive Owl
Spearheading the Blinking Owl as a creative visionary, Brian set out to mold the company around “Artistry, Friendship and Fun”. Intrigued by stories of his great grandfather’s bootlegging adventures, Brian became dedicated
to the artistry of crafting spirits from grain to glass along with utilizing the distillery to build community and friendships. With a background art direction and advertising, Brian decided to utilize a “Wes Anderson” style of branding to showcase our fun and quirky style. The creative process of seeing something made from scratch, along with new and interesting people he has met, are what Brian likes best about owning a distillery.

Robin Christenson, Founder,
Chief Financial Owl
An accomplished entrepreneur, Robin’s mantra is “Don’t give people what they want, give them what they don’t know they want yet.”. These guiding words, coupled with Robin’s obsession with sustainability ,solidified her commitment to California farmers utilizing sustainable practices along with contributing the unexpected, swanky interior design distillery design (especially those gorgeous bathrooms). Her greatest validation in launching the distillery happens when, amongst friends and family, glasses full of Blinking Owl spirits are raised in synchronicity for a moment of
cheers.

Kirsten Vangsness, Partner,
Creative Muse Wizard Owl
Kirsten’s creativity, quirkiness and love for whiskey made her jump at the opportunity to partner with long time friends, Brian and Robin, in launching the Blinking Owl Distillery. While the founders remember the days of watching her improv group and one-woman shows, Kirsten is best known as TV star, agent Penelope Garcia, on the CBS hit crime show, Criminal Minds. You may spot her giving an occasional tour or in the tasting room at the Blinking Owl, and, yes, she is the mastermind behind naming the still, “Bastian Penelope Coco Frigalicious”.

HEAD DISTILLER
Massamiliano Stecca aka Max joined the Blinking Owl team in 2018. Max spent many years in the brewing industry before joining the Blinking Owl team. Max has spent the last several years learning all aspects of distilling under Founder Brian Christenson and the tutelage of former Blinking Owl Head Distiller, Ryan Friesen. Max is passionate about making quality spirits thoughtfully from “soil to the glass” as well and his passion for researching and developing new products. 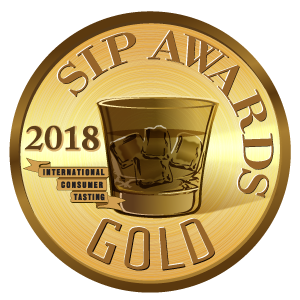 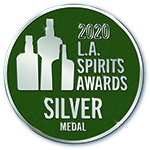 The primary
flavors are Juniper, Hibiscus (as it is the flower of
Santa Ana), Lemon Peel, Orange Peel, and Sage.

Add the gin, sweet vermouth, maraschino liqueur and bitters into a mixing glass with ice and stir until well-chilled.

Strain into a chilled coupe glass.

Garnish with an orange twist. 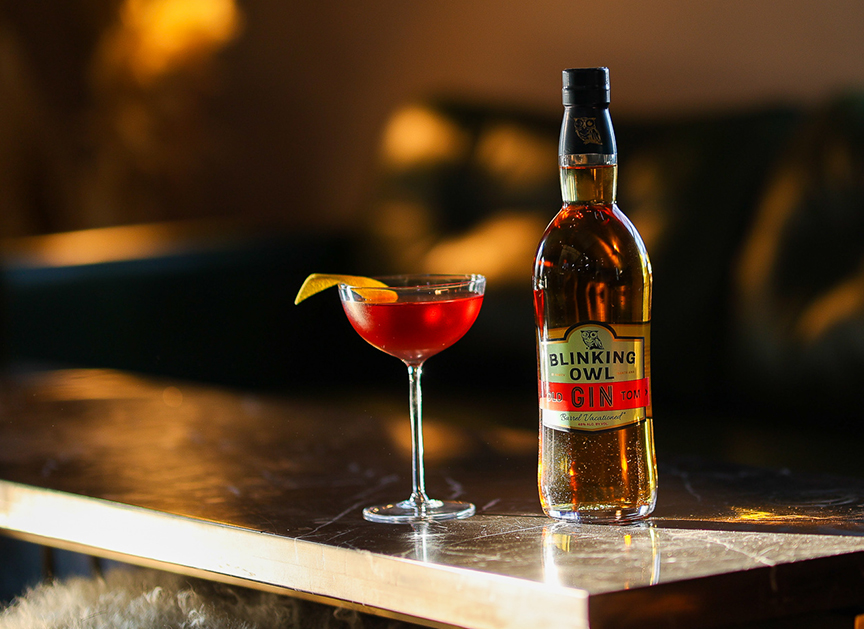